Getting Started in Model Rocketry Photo by Jon Tyson on Unsplash

What is a Model Rocket?

A model rocket is a fairly simple creation made of fairly simple parts! A model rockets body is a thin paper tube with an engine mount inside. The engine is held inside either by friction or by a metal engine hook. The engine mount tube is held in place with thick centering rings which keep the thrust aimed straight back. The fins are usually made of balsa wood or plastic.

I would highly recommend a starter set if you are thinking about rocketry. Estes makes a new line of ready built starter sets, so there’s no excuse to wait anymore! They usually cost around £25-£40, depending on which rocket kit you choose. then all you need to buy is batteries and some engines.

Lets take the “A8-3” engine for an example. The “A” represents the total impulse of that engine. Impulse letters for Estes model rockets stop at D, other companies make M engines or bigger !, Anyway, The “8” portion signifies the average thrust, measured in Newtons. Finally, the “3” section stands for the time delay of the ejection charge.

The ejection charge is what will push the recovery device out of the rocket.

The numbers and letters continue on like so. The most common engines are 1/2A, A, B, C, and D.

As for what an engine is, well, read ahead. Model rocket engines are solid fuel propellant motors. The Estes engines use Black Powder.

There are three sizes of engines (common ones anyway). First there’s 13mm which is the mini or 1/2A sizes. Mini engines are indicated with a “T” after the code. Next there’s 18mm or standard size. These are the A, B, and C engines. The last common type of engine is the 24mm which is the D sized engines.

The recovery device is what will bring your rocket down to the ground safely after a flight. The type of recovery device depends on the size and weight of the rocket. Some rockets can use two types of devices, and it’s up to you to choose one.

The most common type of recovery device is the parachute. A properly sized parachute will bring the rocket down slow and gentle. One bad thing about the ‘chute, though, is that they drift in the wind, which could be bad if you have trees in your field. The next common type of recovery is a streamer. A streamer is just a long piece of material (usually crepe paper or plastic). The whole point of a streamer is to create drag in the air to slow the rocket down a little. Steamers don’t often drift and are usually more accurate. There are also two types of recovery for tiny rockets. They are Tumble and Feather-weight recovery. The engine is not held in place and ejects itself at apogee. The rocket then tumbles or falls to the ground.

Then there are some uncommon types of recovery devices. Some rockets use helicopter veins to slow the descent down, other rockets use gliders or are gliders themselves.

They accelerate 0-60 m.p.h. in 0.035 seconds in a distance of 24 inches! What else home made can you make which goes this fast under its own steam?

Scale models are of models of real Rockets and Missiles

There are scale models of the Space Shuttle, and the large Saturn 5 rockets and many others

There is also models of famous Sci-Fi space ships, including the U.S.S. Enterprise and a Klingon Bird of Prey

Special effects machines may helicopter back, glide, deploy parachutists or glitter effects, carry payloads such as eggs or electronic devices, carry small cameras – still or video, measuring equipment such as altitude measurers, in fact the only limit is your imagination.

Apogee
The highest point in a rocket’s flight.
Blast Deflector
A metal plate used to divert flame and gasses away from the engine.
CATO
CAtastrophic Take Off – when the rocket “explodes” on the pad
CG
Centre of Gravity- or where the rocket balances
Cluster
When more than one engine is used simultaneously to boost the rocket.
Ejection
The point when the rocket deploys the recovery system.
Igniter
A piece of wire that receives electricity from the launch controller to light the engine.
Launch Controller
An electrical device that is used with an igniter to light a rocket engine.
Launch Lug
a small tube that guides the rocket up the launch rod.
Launch Rod
A rod that guides the rocket until it gains enough speed for its fins to be effective.
Lawn Dart
When a rocket doesn’t eject it’s recovery device and dives to the ground.
Multi-Staging
When two or more engines are used in sequence to boost the model to higher altitudes.
Mylar
a thin, silvery, plastic-like material generally used in party balloons. This material packs very small and is good for streamers and parachutes.
RSO
Range safety officer - person who is in control of the launches and recovery of rockets on-site.
N.A.R.
National Association of Rocketry (main organisation for rocketry in the U.S.A.)
Payload
A object carried by the rocket during flight, e.g. a Camera.
U.K.R.A.
United Kingdom Rocketry Association
Wadding
A flame resistant cloth that gets packed in between the parachute and the engine. This protects the parachute from getting burned. 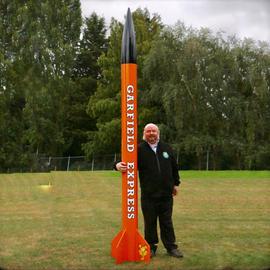 I’ve been flying rockets for over 26 years and radio controlled models for over 30 years. My rockets have come in various sizes, from just a few inches high to over 8 feet, using motors from A to J in power.

Getting Started
Our own Peter Barrett has provided a great getting started tutorial covering the basics of model rocketry. Have a look and if you’re new to the hobby then have a go!
Ron Hatcher
Last updated on 05 May 2022 1 min read
Project